The Imperial City is a walled enclosure (10km perimeter, 6m high, 21m thick, and 10 entrances) within the citadel of the city of Huế, the former Imperial Capital of Vietnam, and lies along the Perfume River.

It is composed of three circles of ramparts: the Forbidden Purple City, once the residence of the royal family and badly damaged during the Vietnam War, the Imperial City, the royal tombs, the flag tower, as well as pagodas, temples, a library and museum. 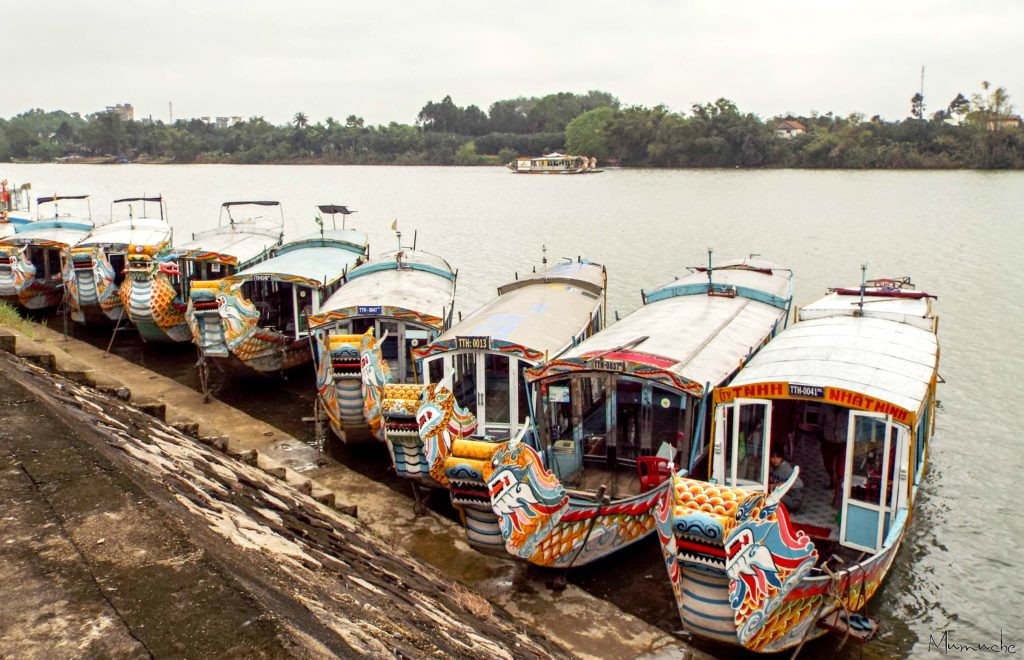 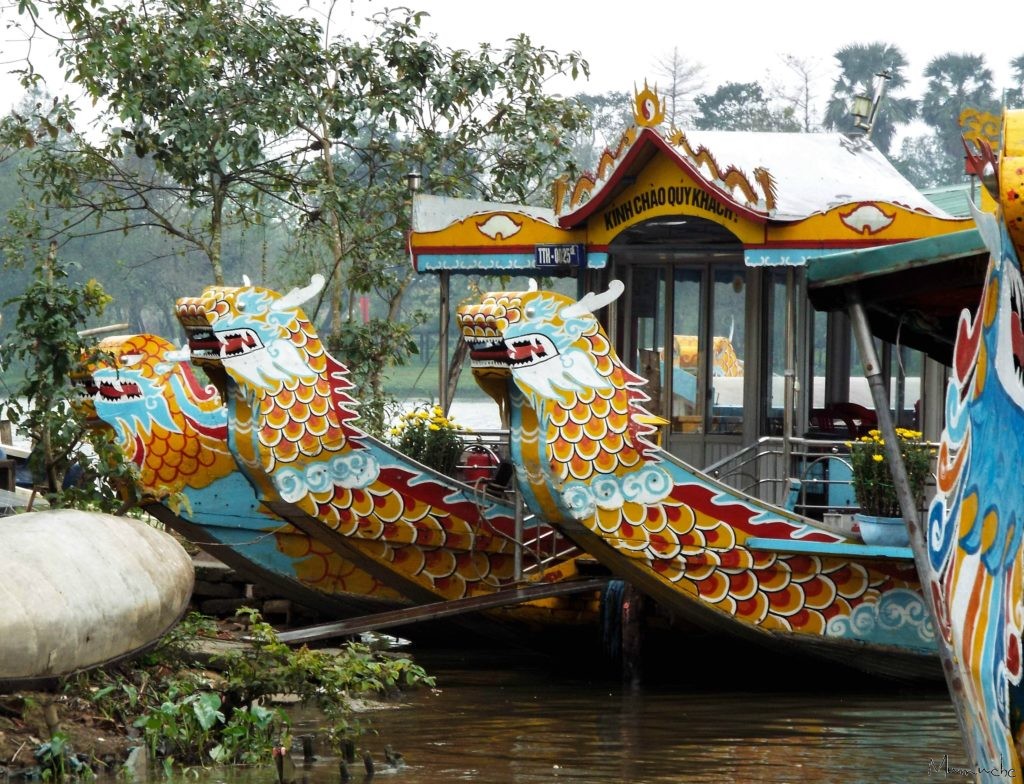 Capital of the Nguyễn, the lords of the South, in the sixteenth century, Hue became the capital of the whole of Vietnam after its reunification in 1802 and held its position for nine Nguyen dynasties until 1945.
At the time of French Indochina, Hue was the capital of the Protectorate of Annam, one of the five subdivisions of the territory. The monarchy was maintained but did go under supervision. 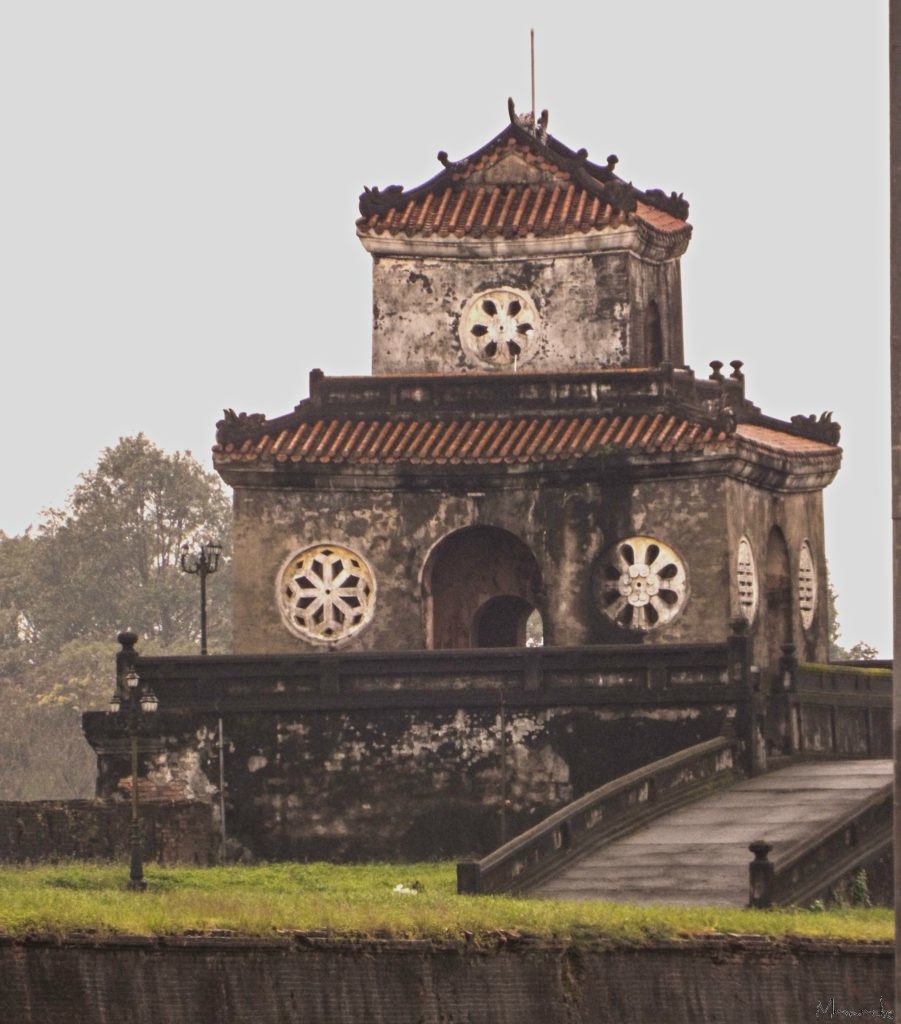 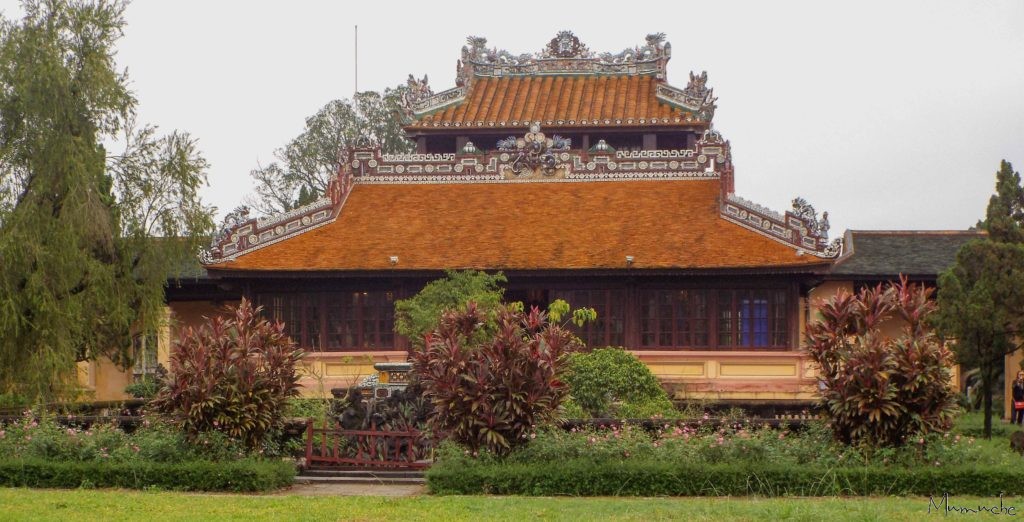 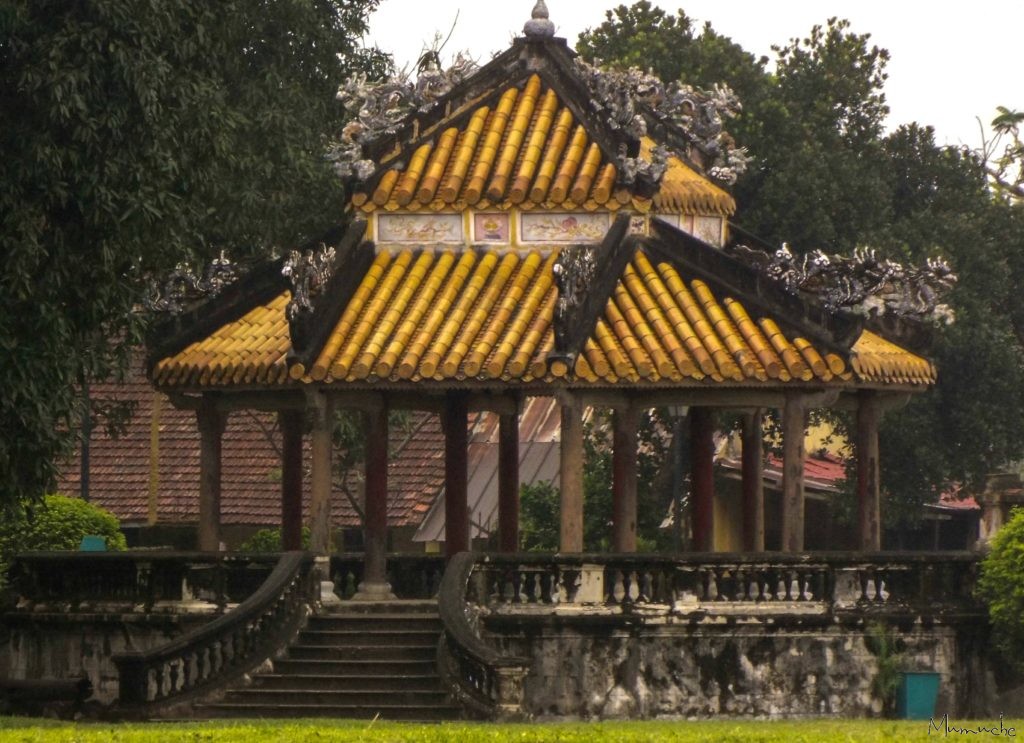 Since the end of Vietnam War in 1975, the citadel has been open to the public and has received millions of tourists every year.
In 1993, all the monuments of Hue have been classified by Unesco as a cultural heritage of humanity. 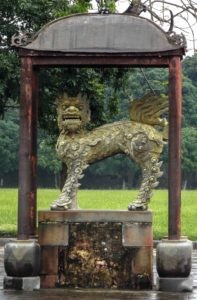 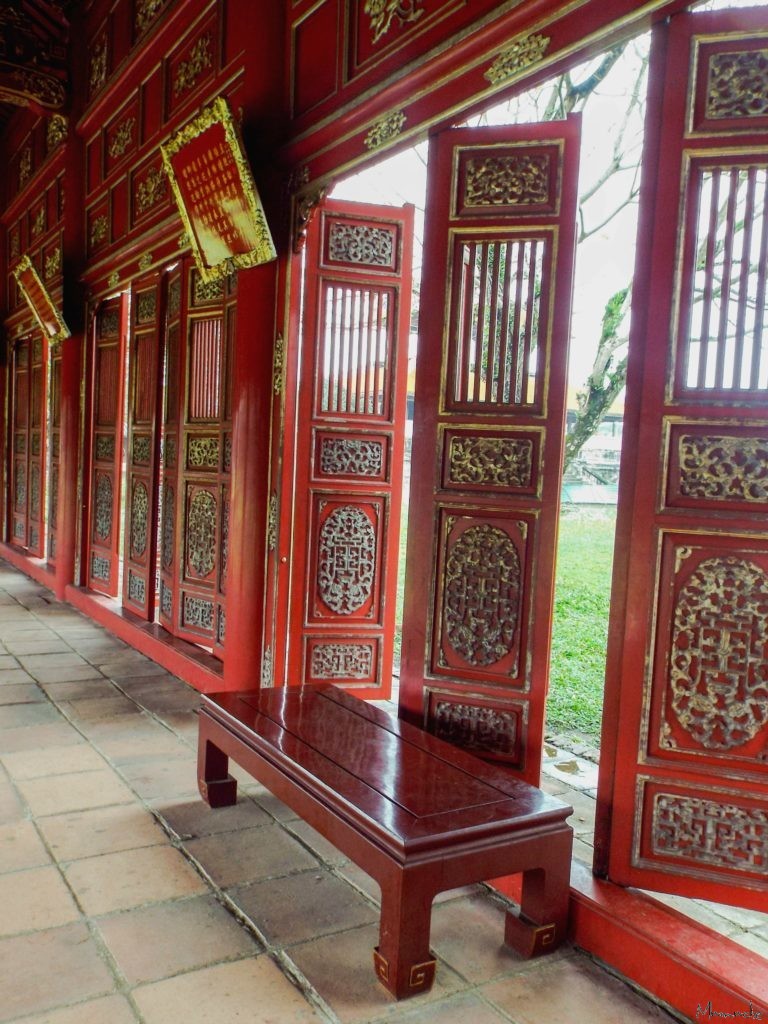 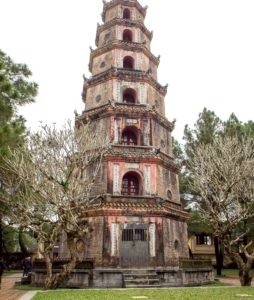 Built in 1601, The Pagoda of the Celestial Lady is a historic temple in the city of Huế in Vietnam. Its iconic seven-story pagoda is regarded as the unofficial symbol of the city, and the temple has often been the subject of folk rhymes.

According to the royal annals, the local legend says that an old lady, known as Thiên Mụ (literally “celestial lady”), dressed in red and blue, sat at the site, rubbing her cheeks.
She foretold that a lord would come and erect a pagoda on the hill to pray for the country’s prosperity.
She then vanished after making her prophecy.
Upon hearing this, one ordered the construction of a temple at the site, thus the beginning of Thiên Mụ

The original temple was simply constructed, then later expanded and refurbished. 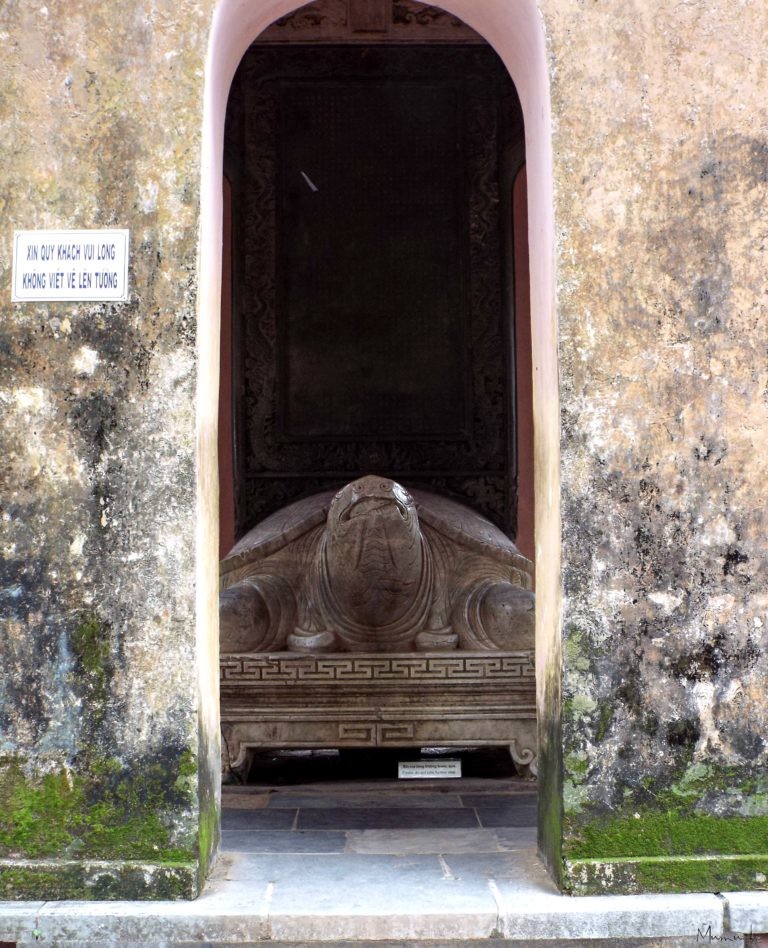 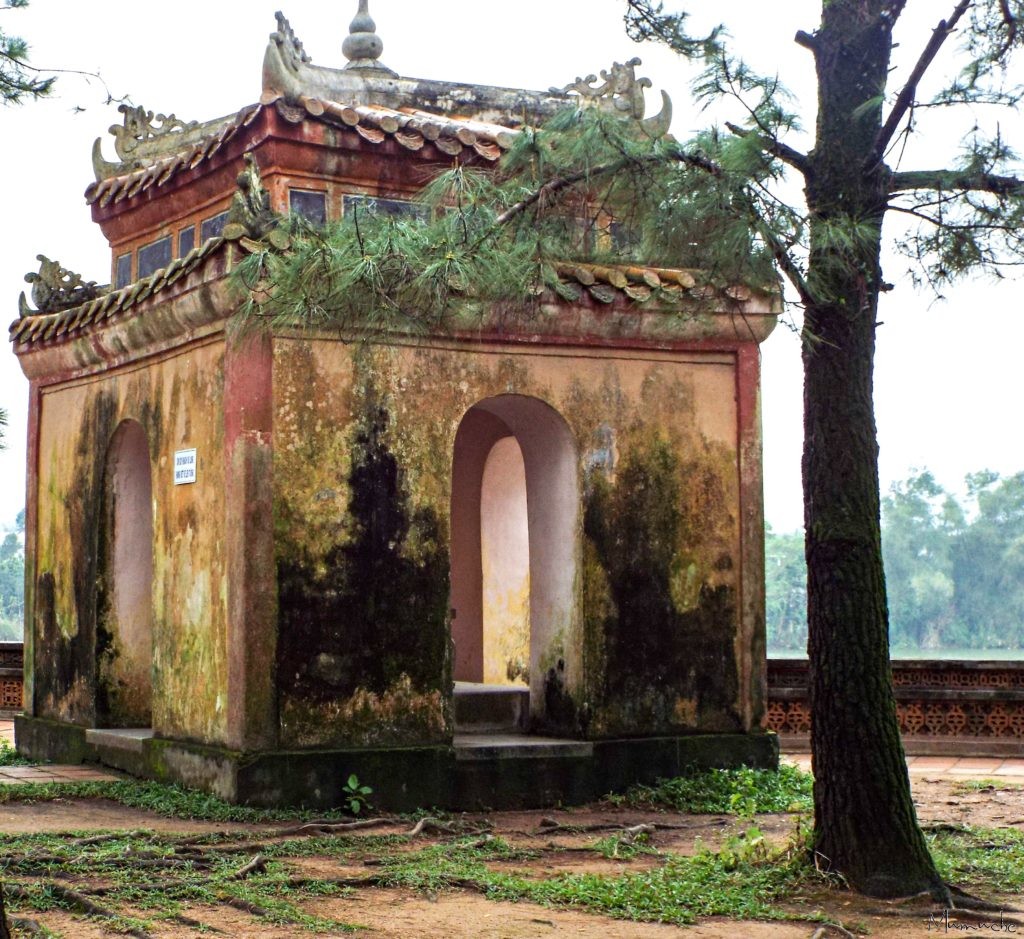 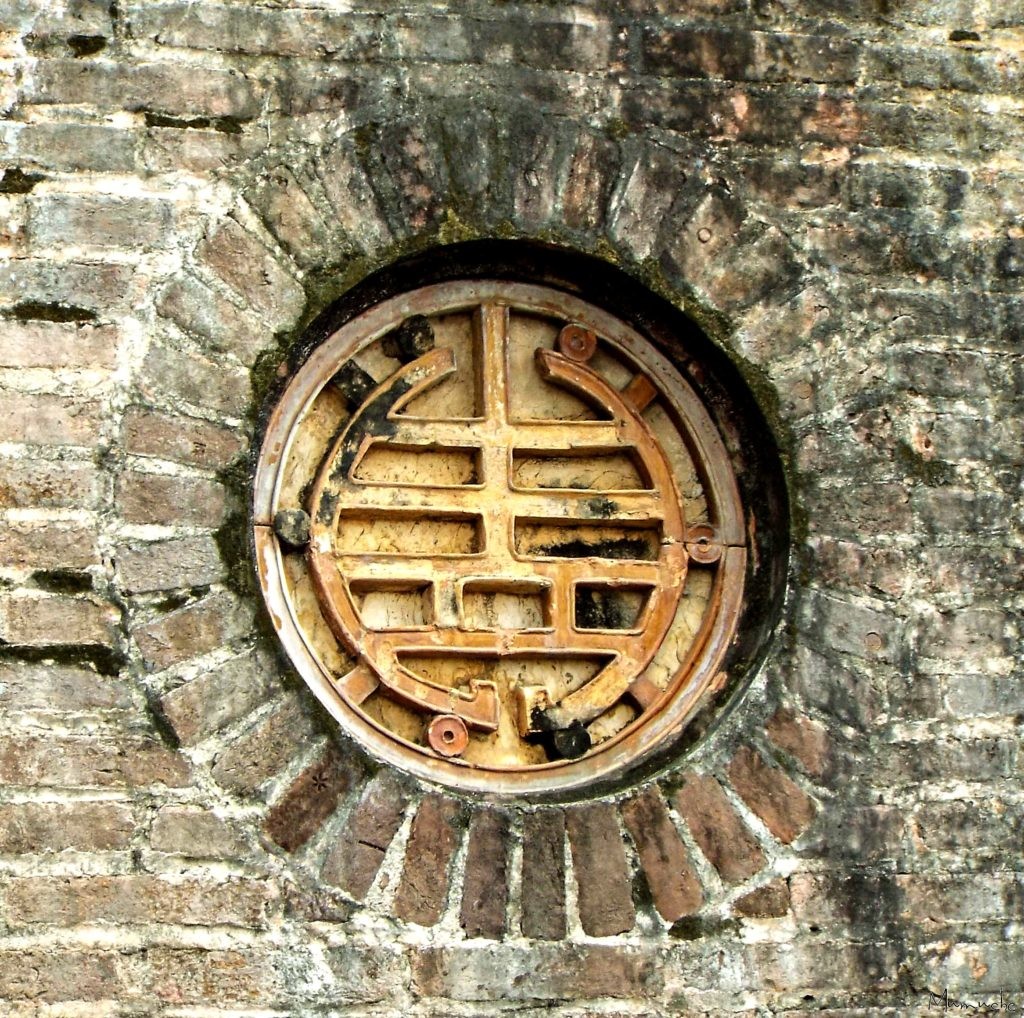 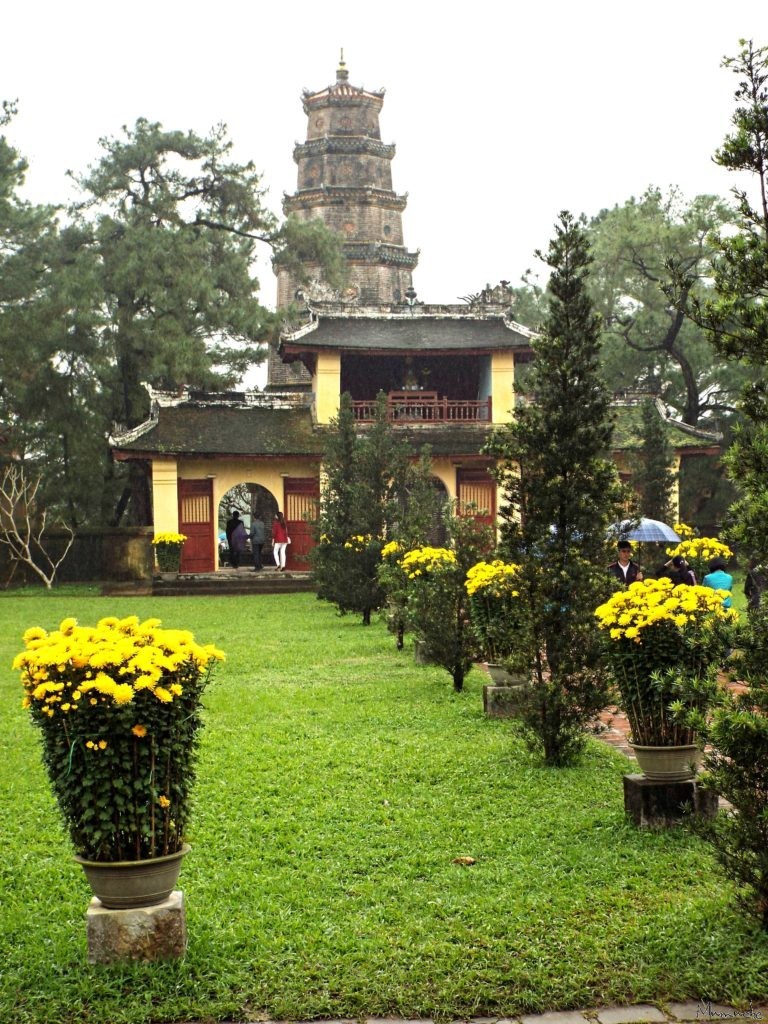 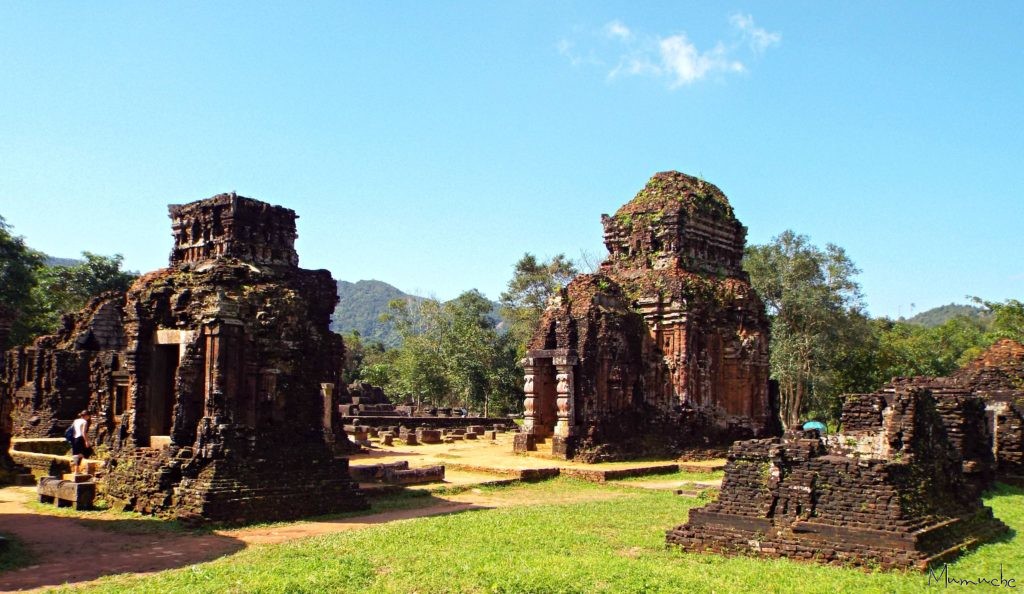 Mỹ Sơn is a cluster of abandoned and partially ruined Hindu temples in Vietnam, constructed between the 4th and the 14th century AD by the kings of Champa.  It is located near the village of Duy Phú, 69 km southwest of Da Nang and 40 km from Hoi An. 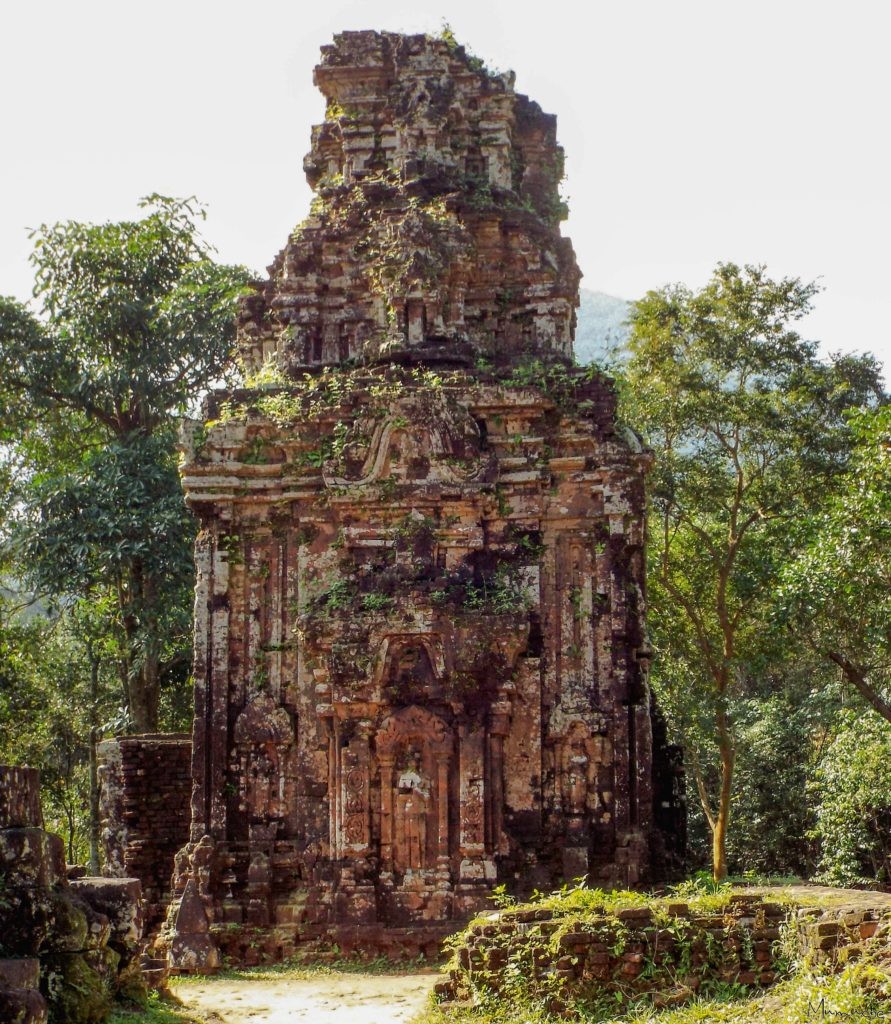 It is regarded as one of the foremost Hindu temple complexes in Southeast Asia and is the foremost heritage site of this nature in Vietnam.

From the 4th to the 14th century AD, the valley at Mỹ Sơn was a site of religious ceremony for kings of the ruling dynasties of Champa, as well as a burial place for Cham royalty and national heroes.

The constructions include temples, towers, tombs and reddish brick structures that are linking the various buildings. You can visit Champa remains elsewhere in Vietnam, for example in Mui Ne and in Nha Trang.

The temples are in a valley roughly two kilometres wide that is surrounded by two mountain ranges, and are dedicated to the worship of the god Shiva. 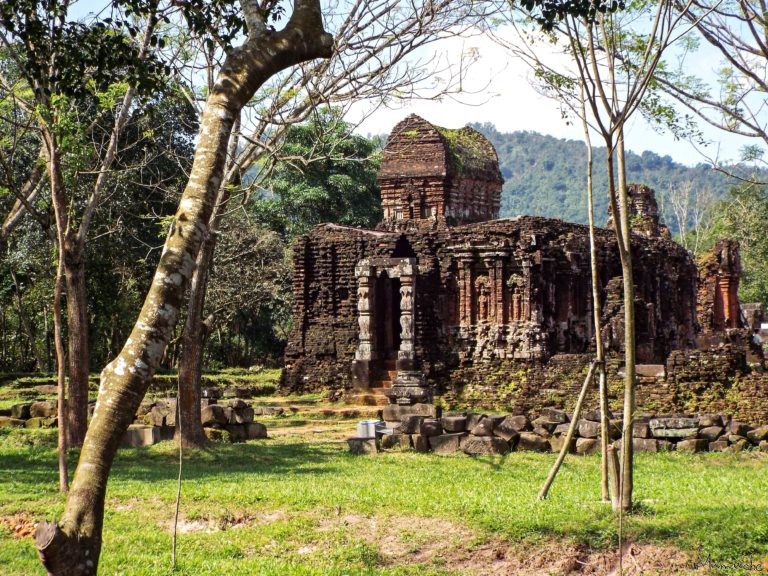 At one time, the site encompassed over 70 temples as well as numerous stele bearing historically important inscriptions in Sanskrit and Cham.

The Cham reign before succumbing, and My Son was buried and forgotten for centuries, until the year 1885 where it was discovered by the French. 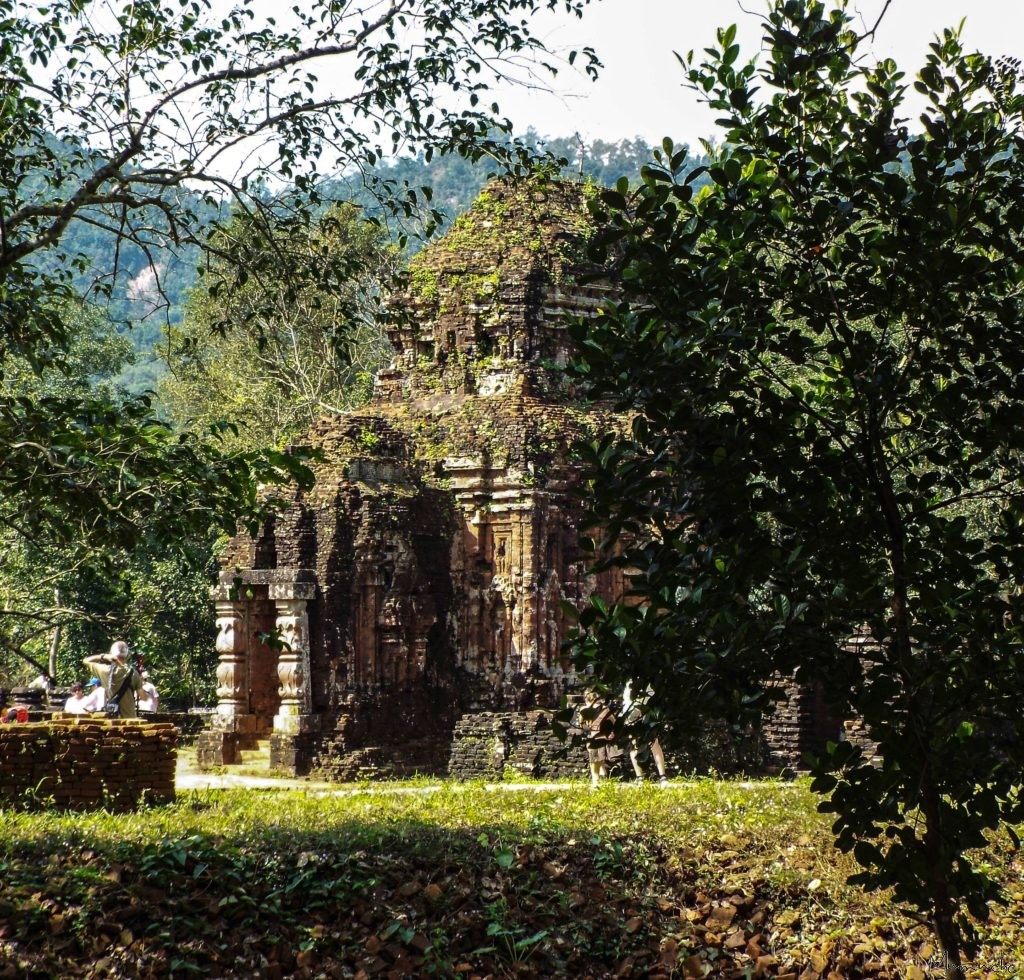 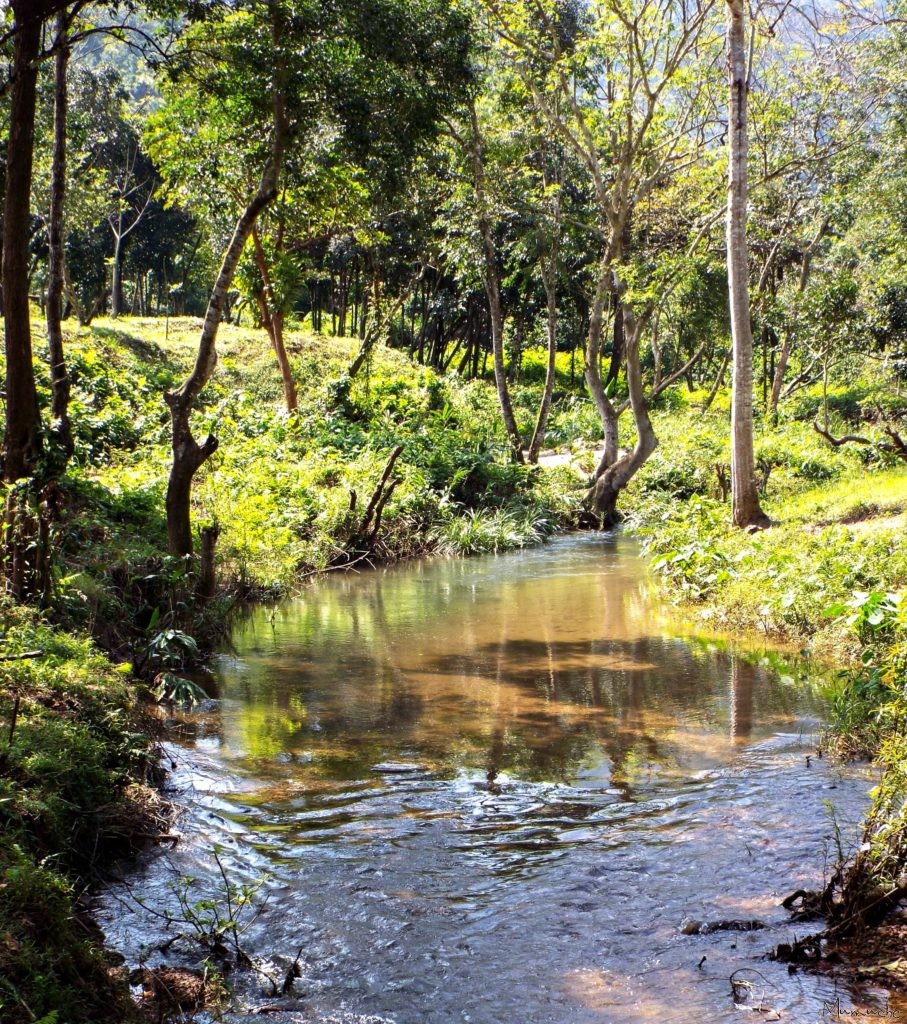 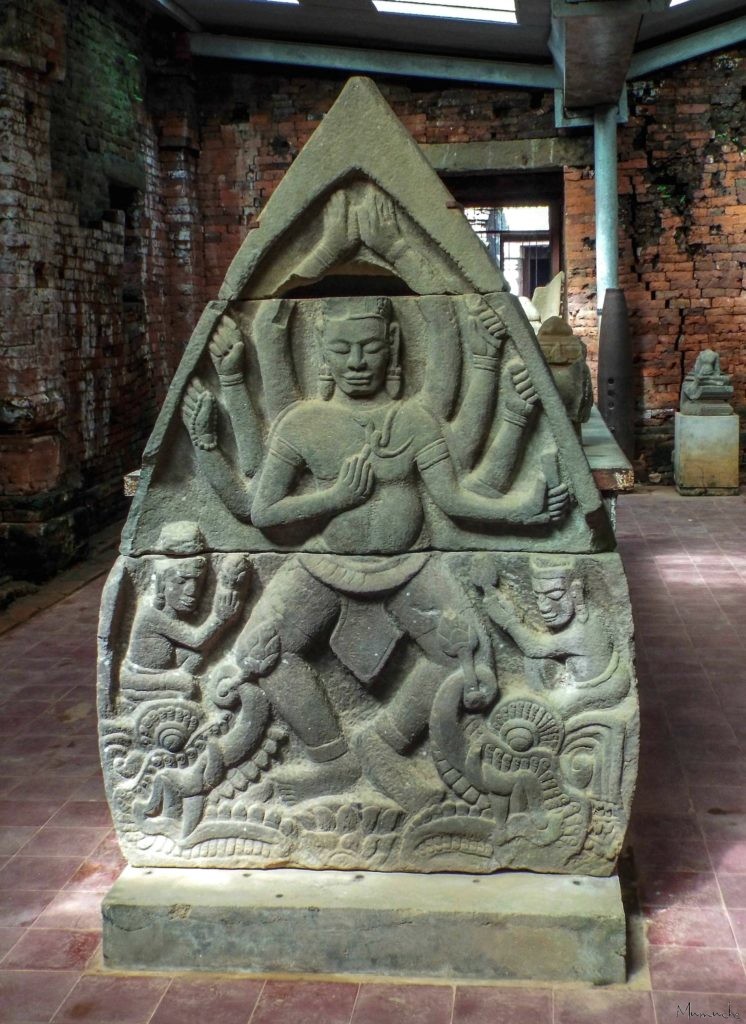 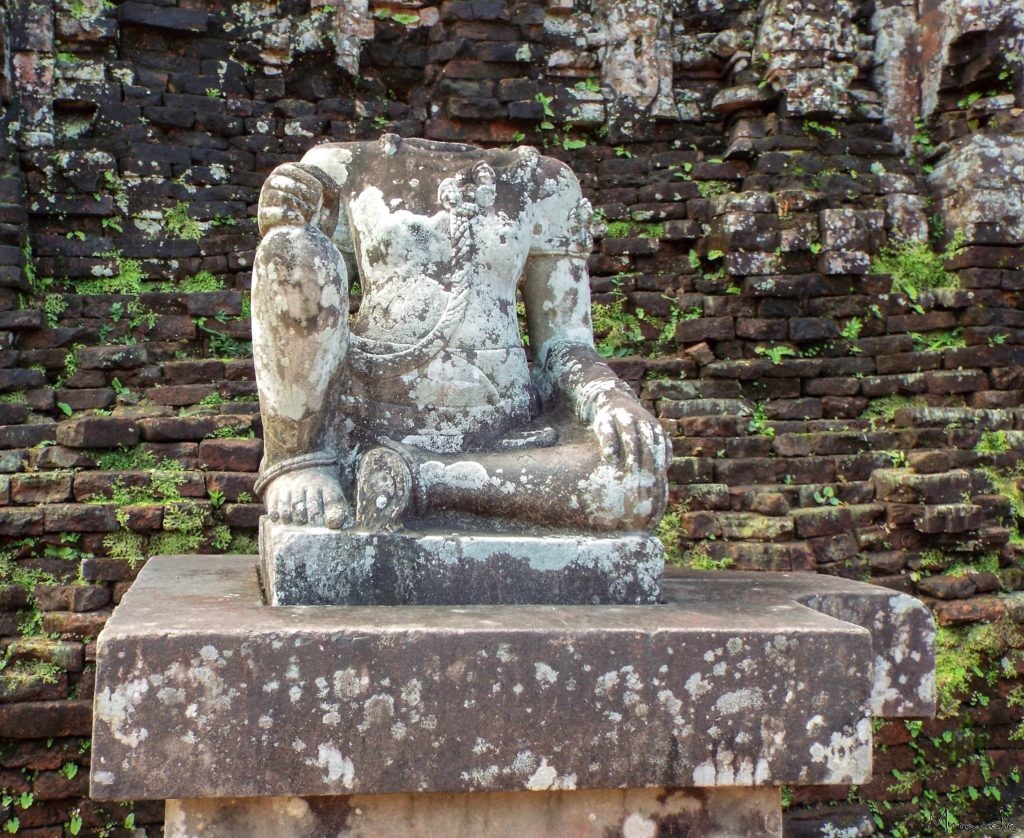 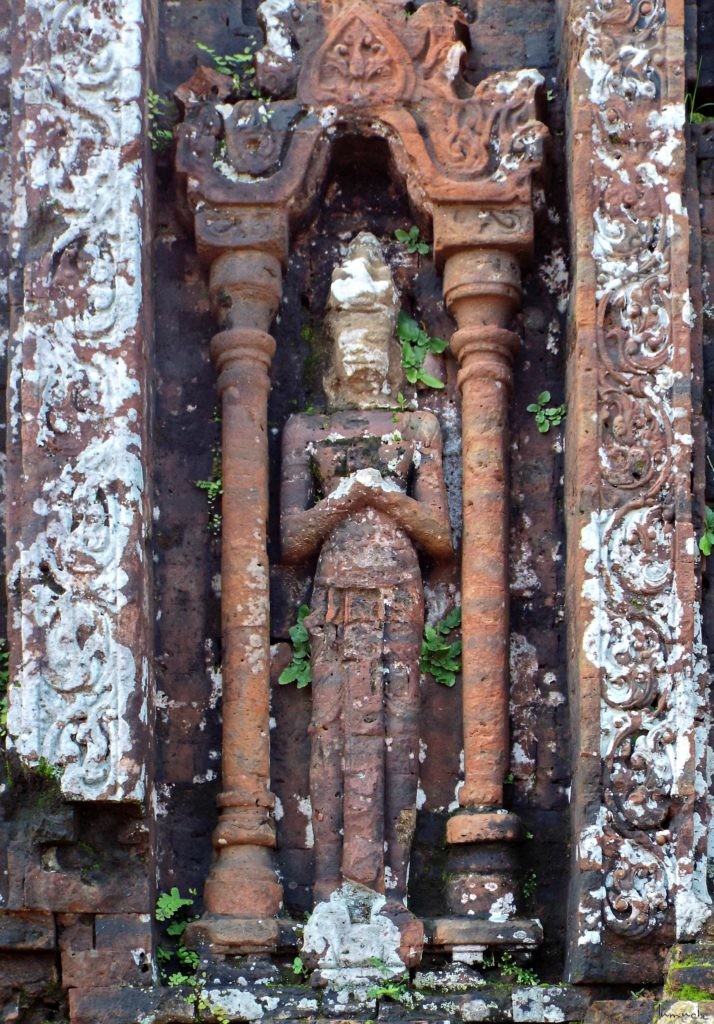 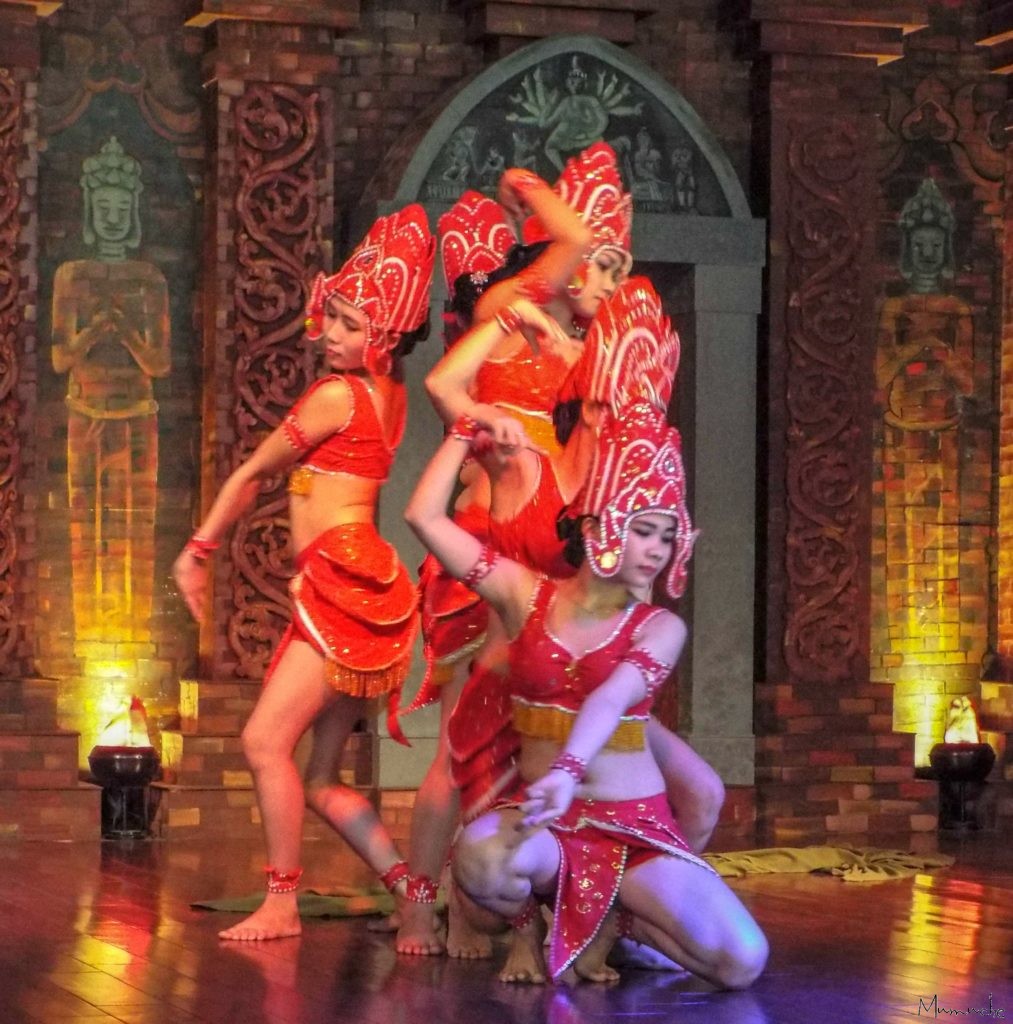 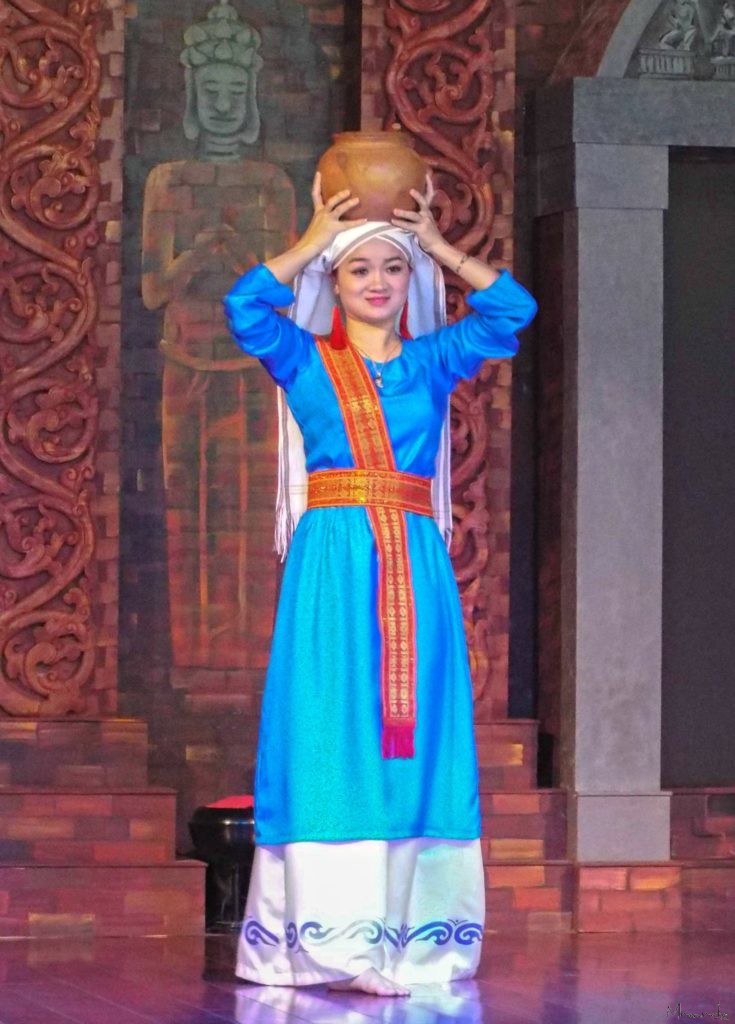 Mỹ Sơn is perhaps the longest inhabited archaeological site in Indochina, but a large majority of its architecture was destroyed by US carpet bombing during a single week of the Vietnam War.  Fortunately 20 buildings have great condition.

Mỹ Sơn  temples have Indian and Indonesian influences, noticeable particularly in stone sculptures shaped goddesses, reminding by its style to the apsaras of Temples of Angkor in Cambodia.

It is also often compared with other historical temple complexes in Southeast Asia, such as Borobudur of Java in Indonesia, , Bagan of Myanmar and Ayutthaya of Thailand.

As of 1999, My Son has been recognized by UNESCO as a world heritage site.